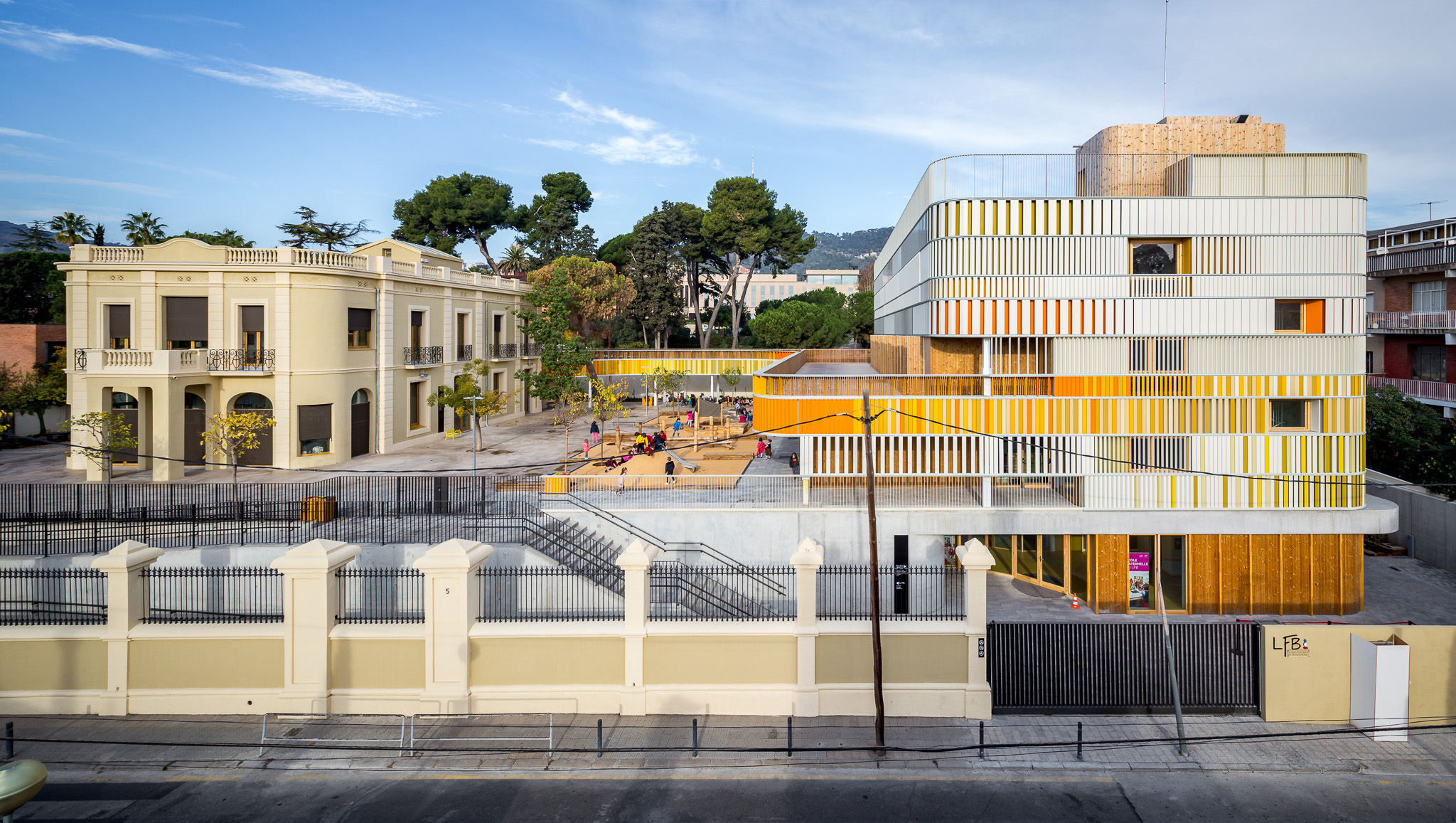 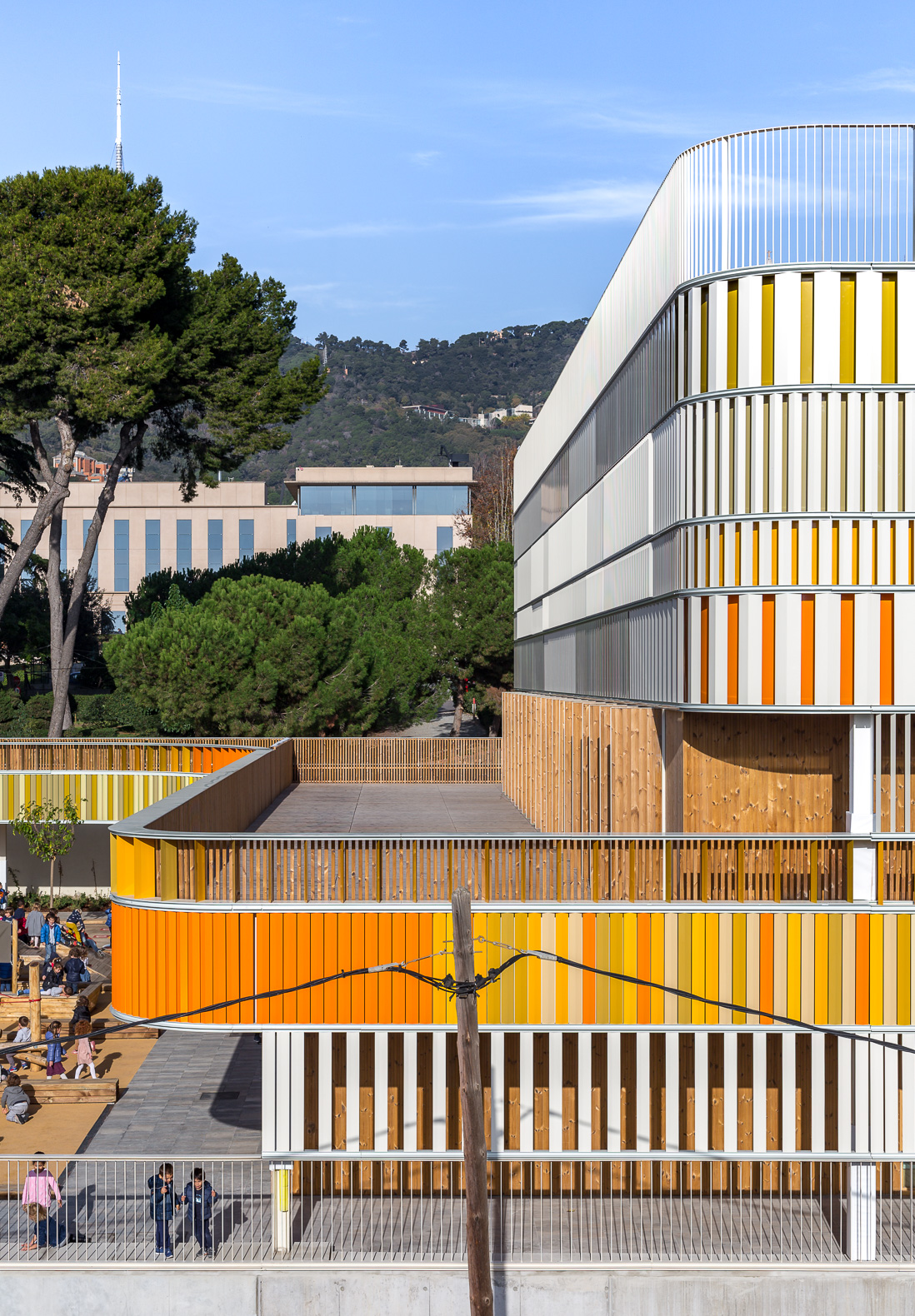 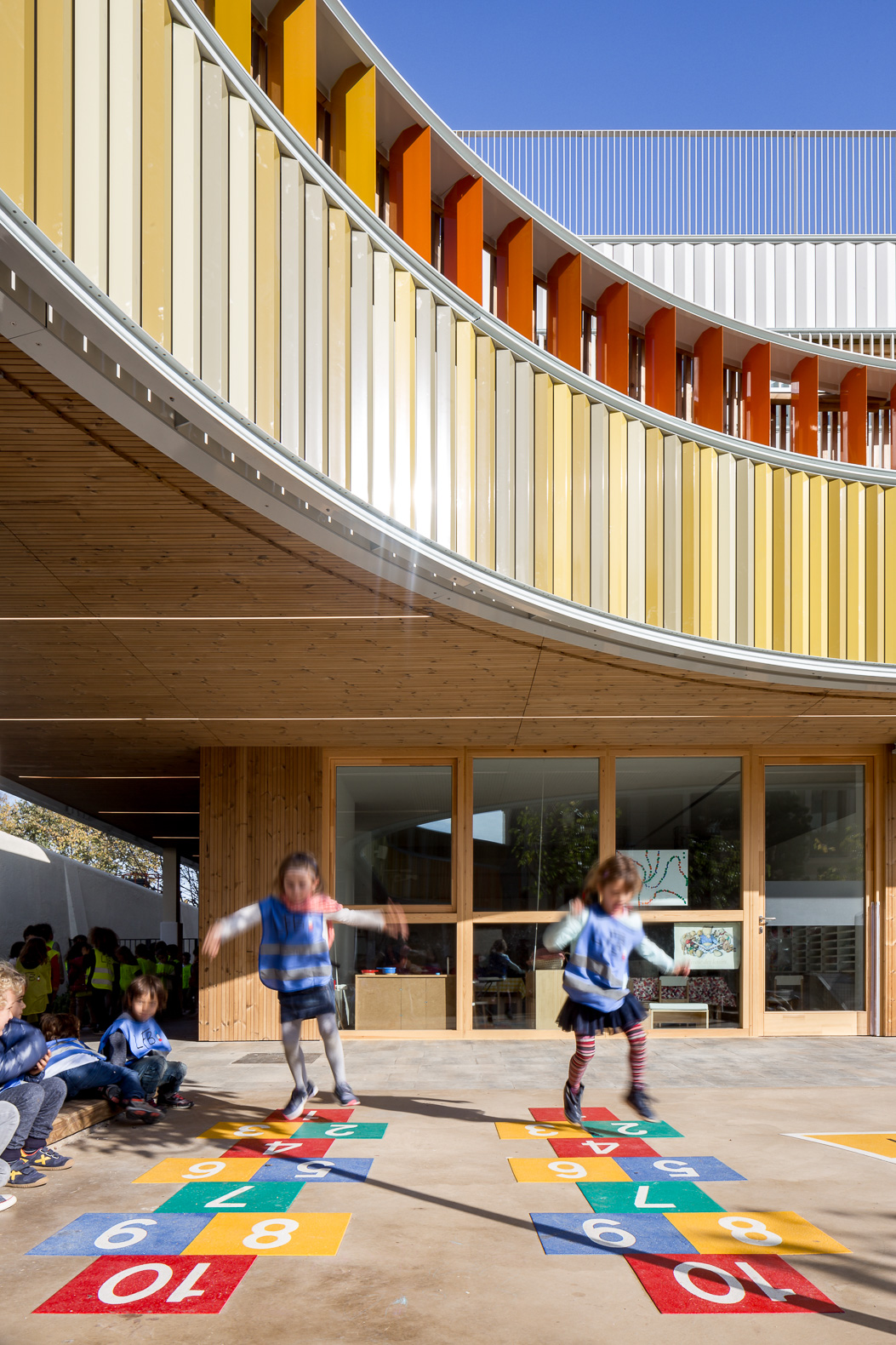 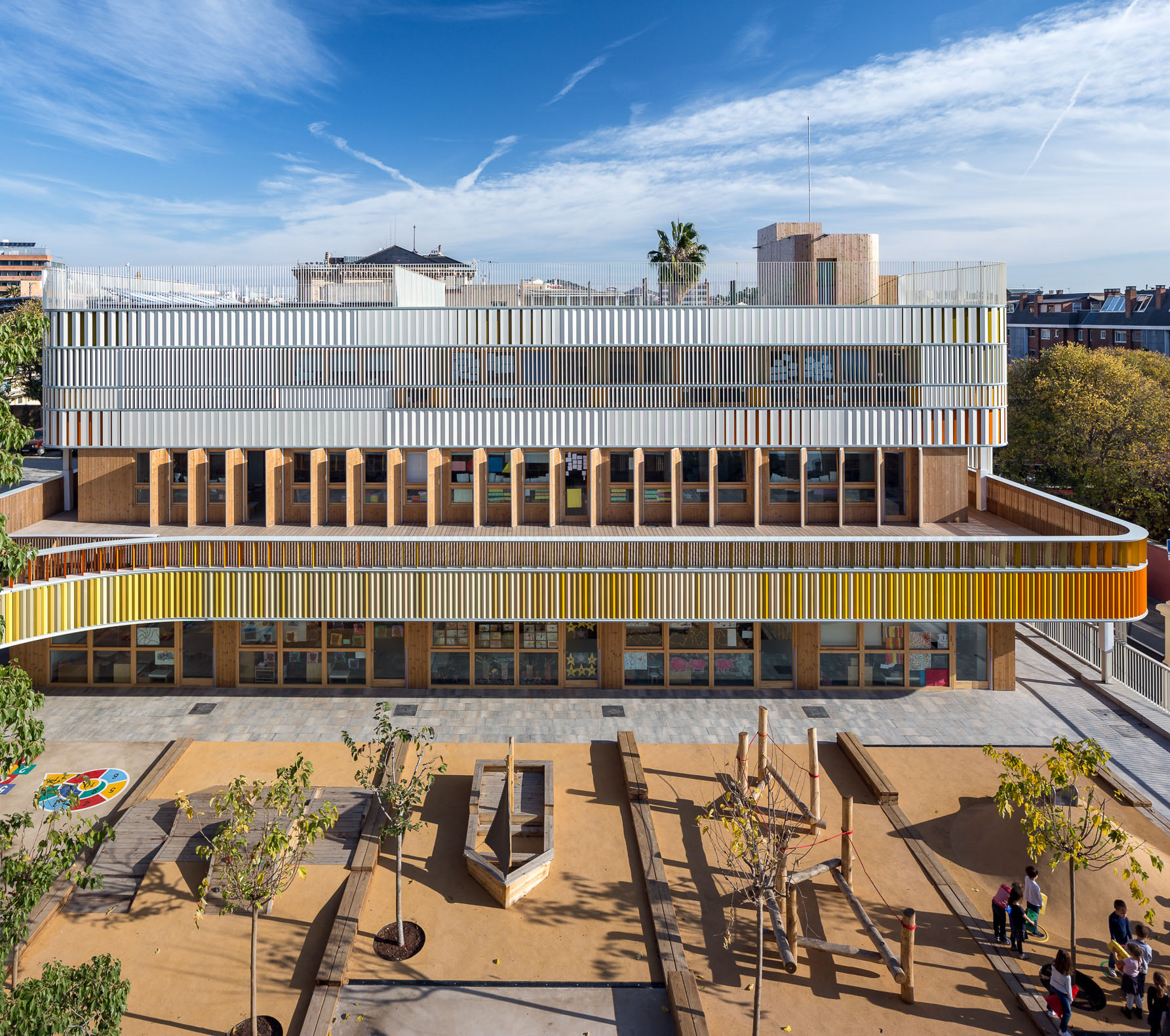 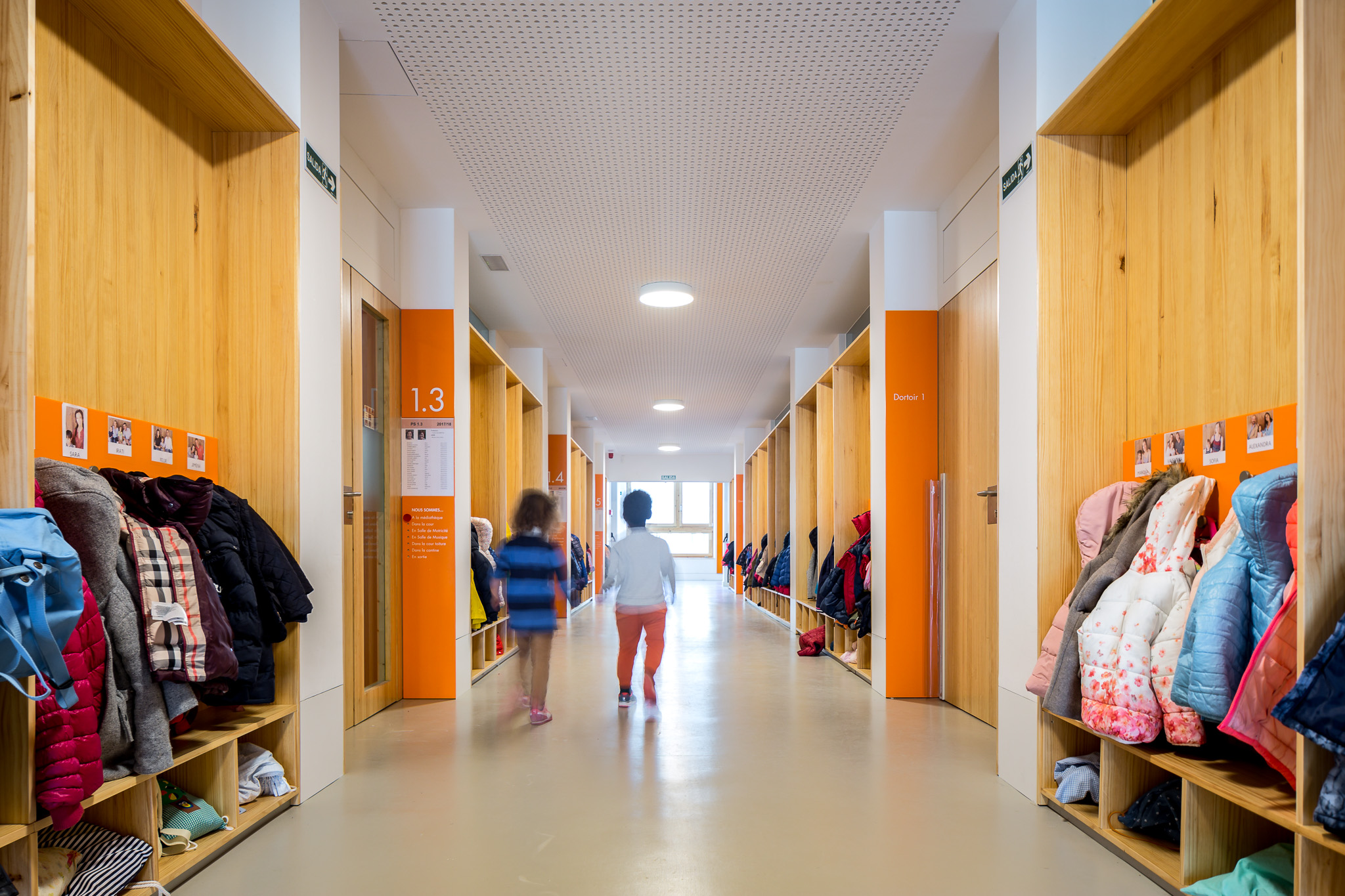 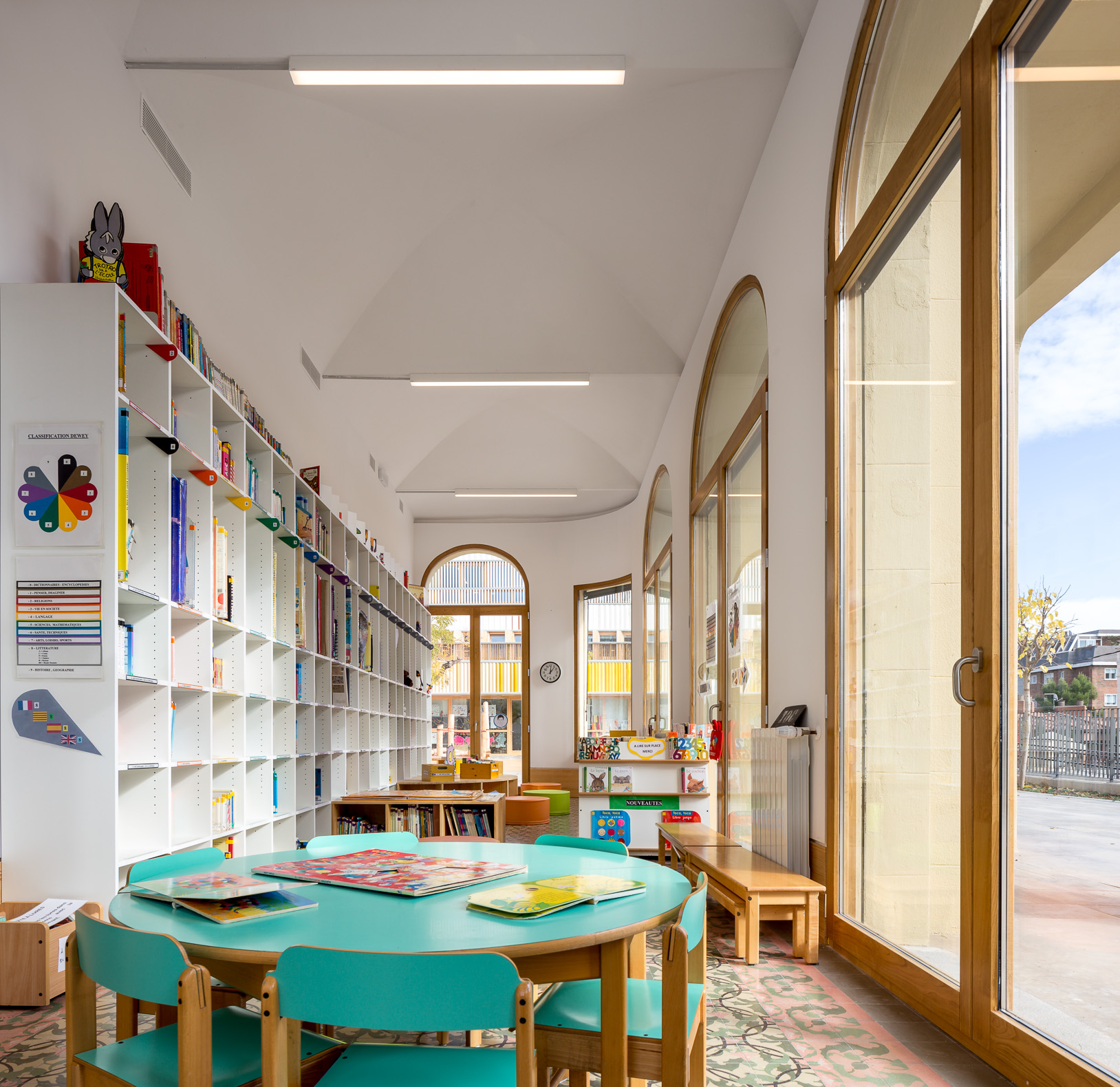 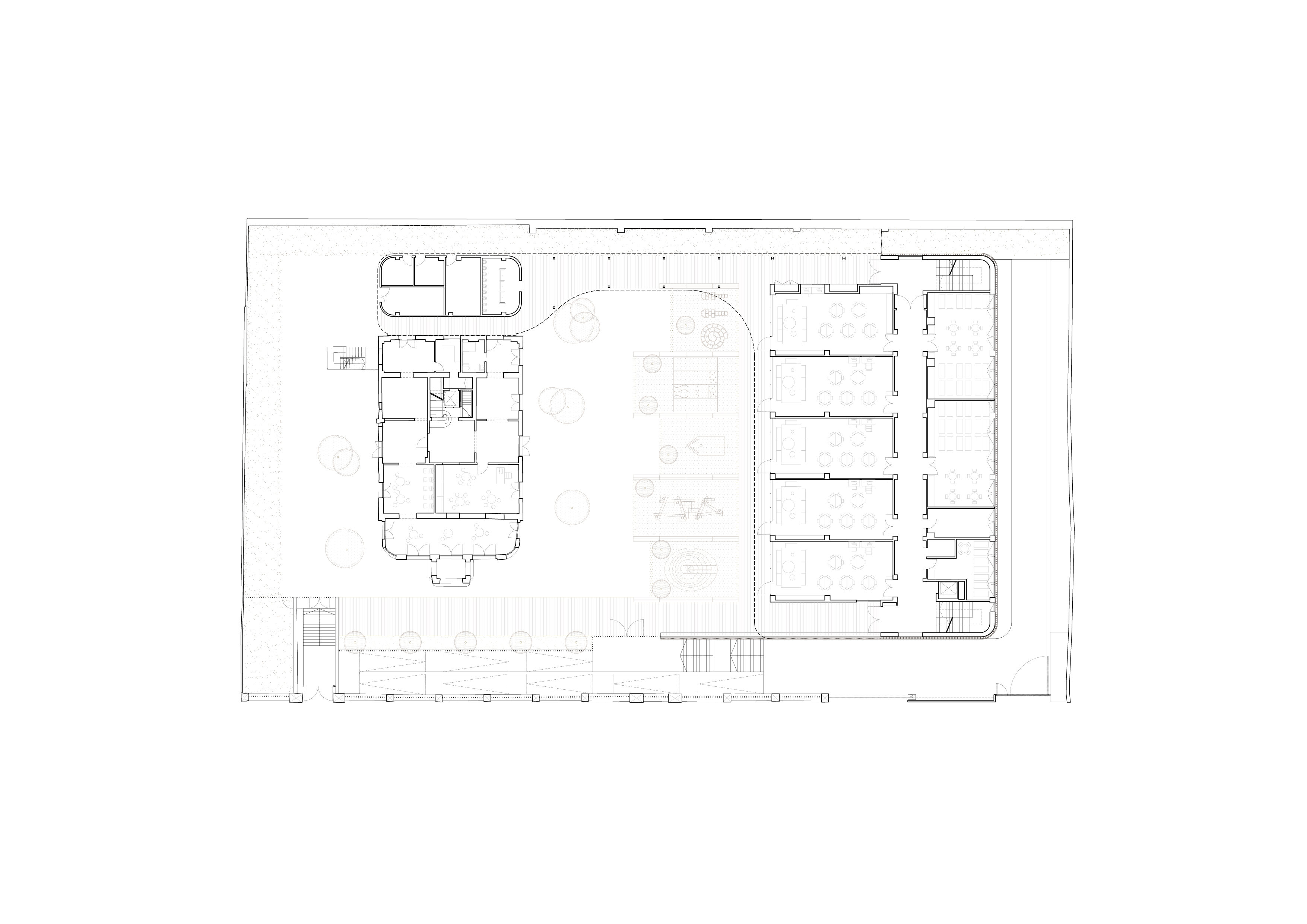 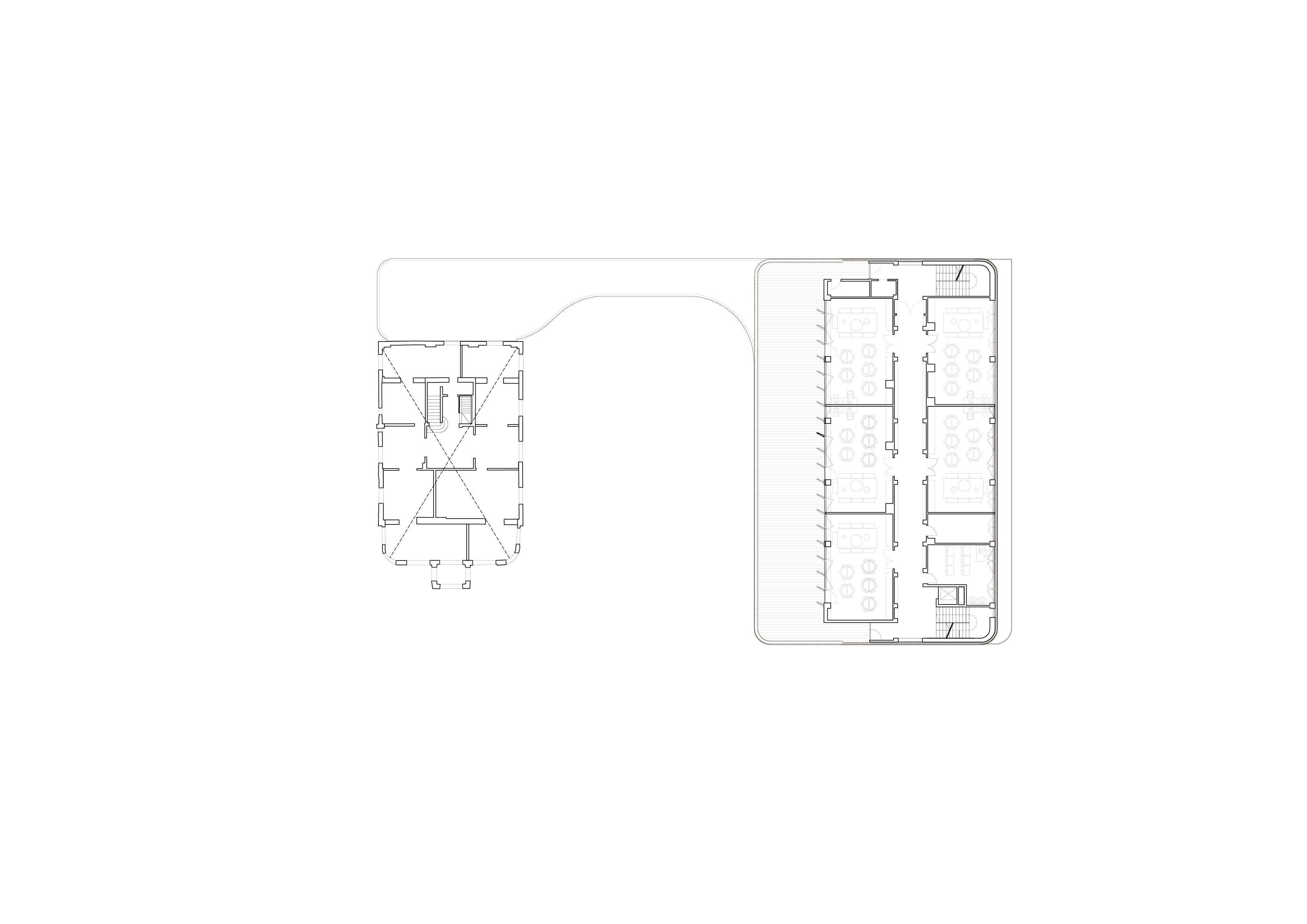 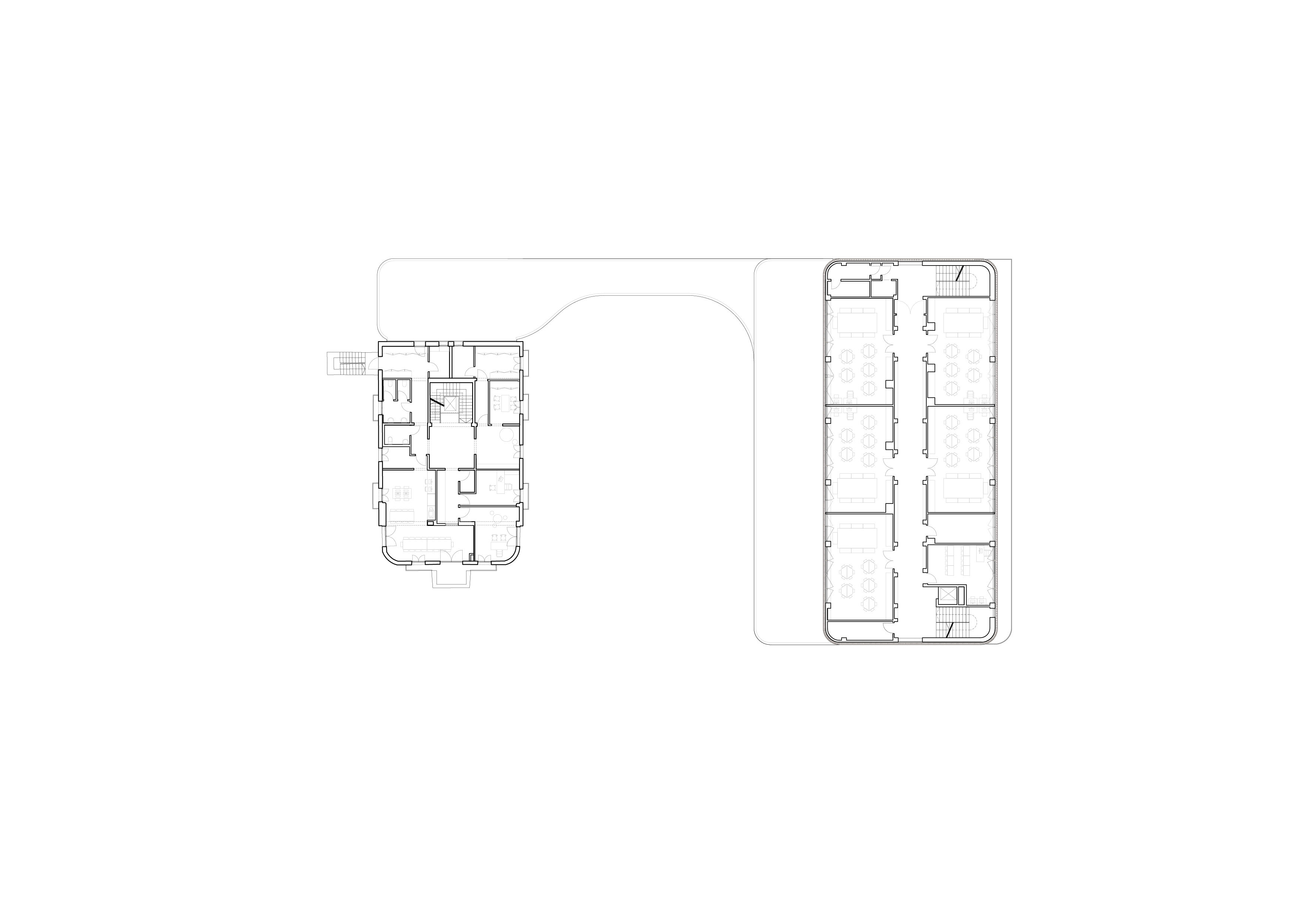 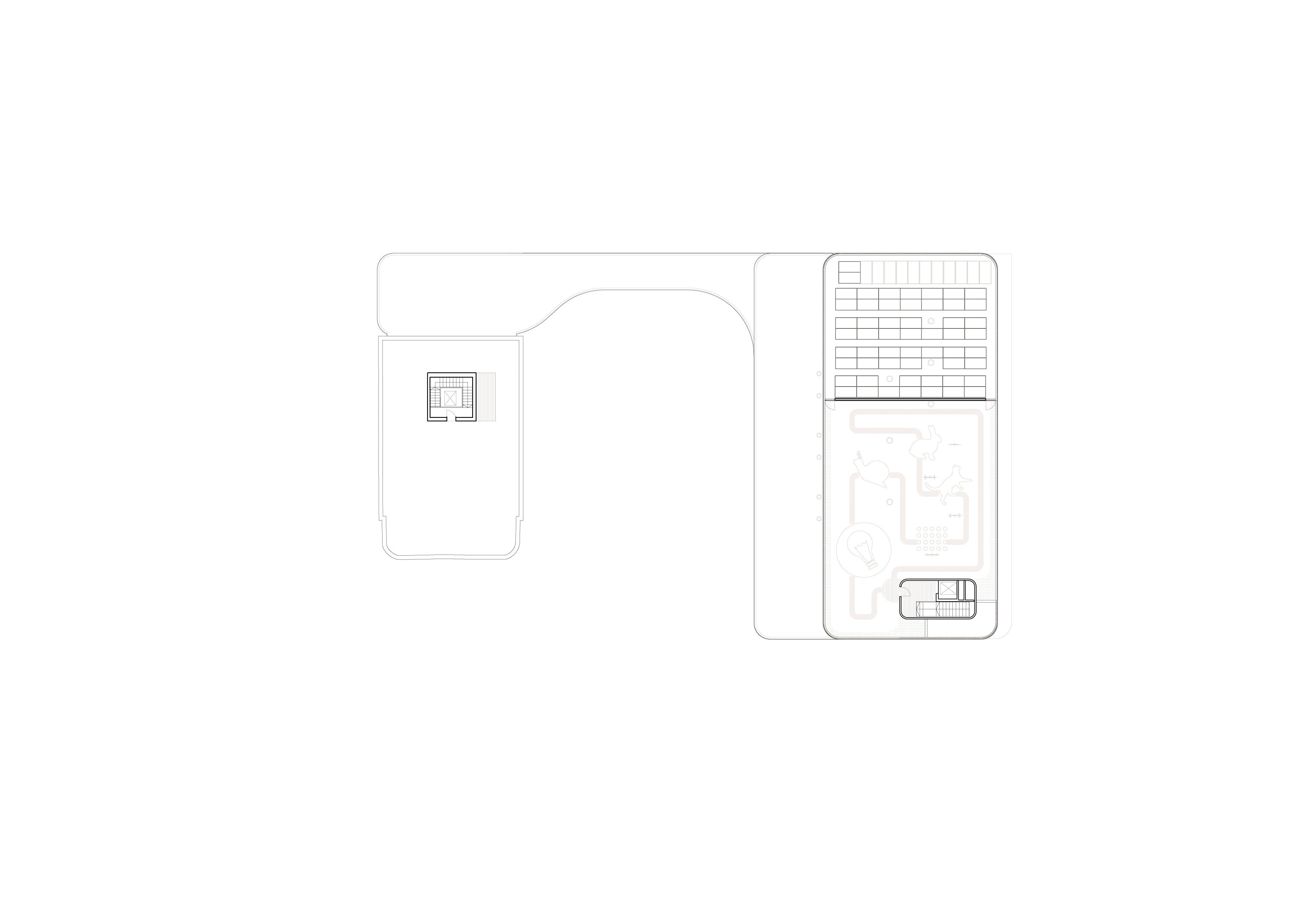 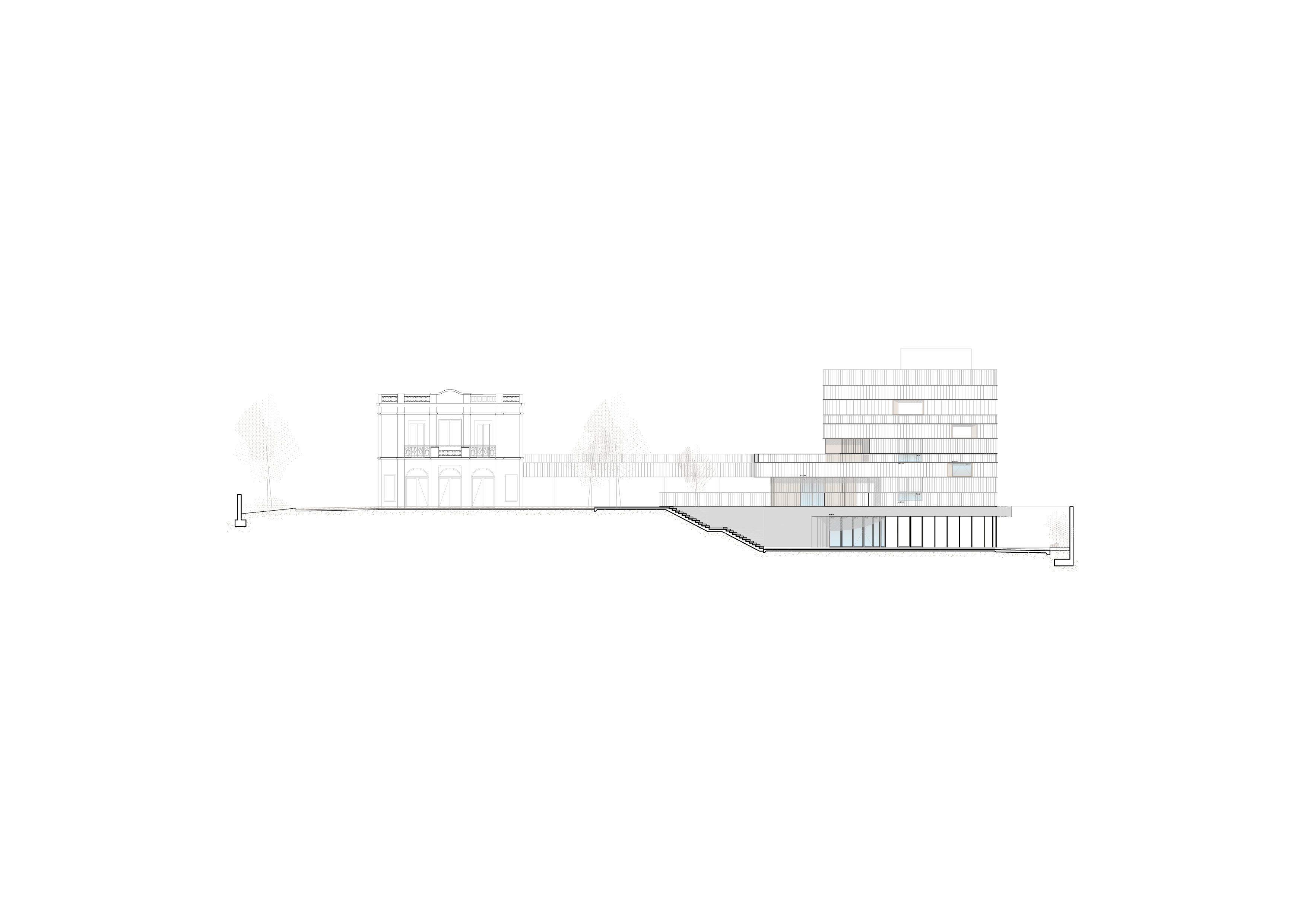 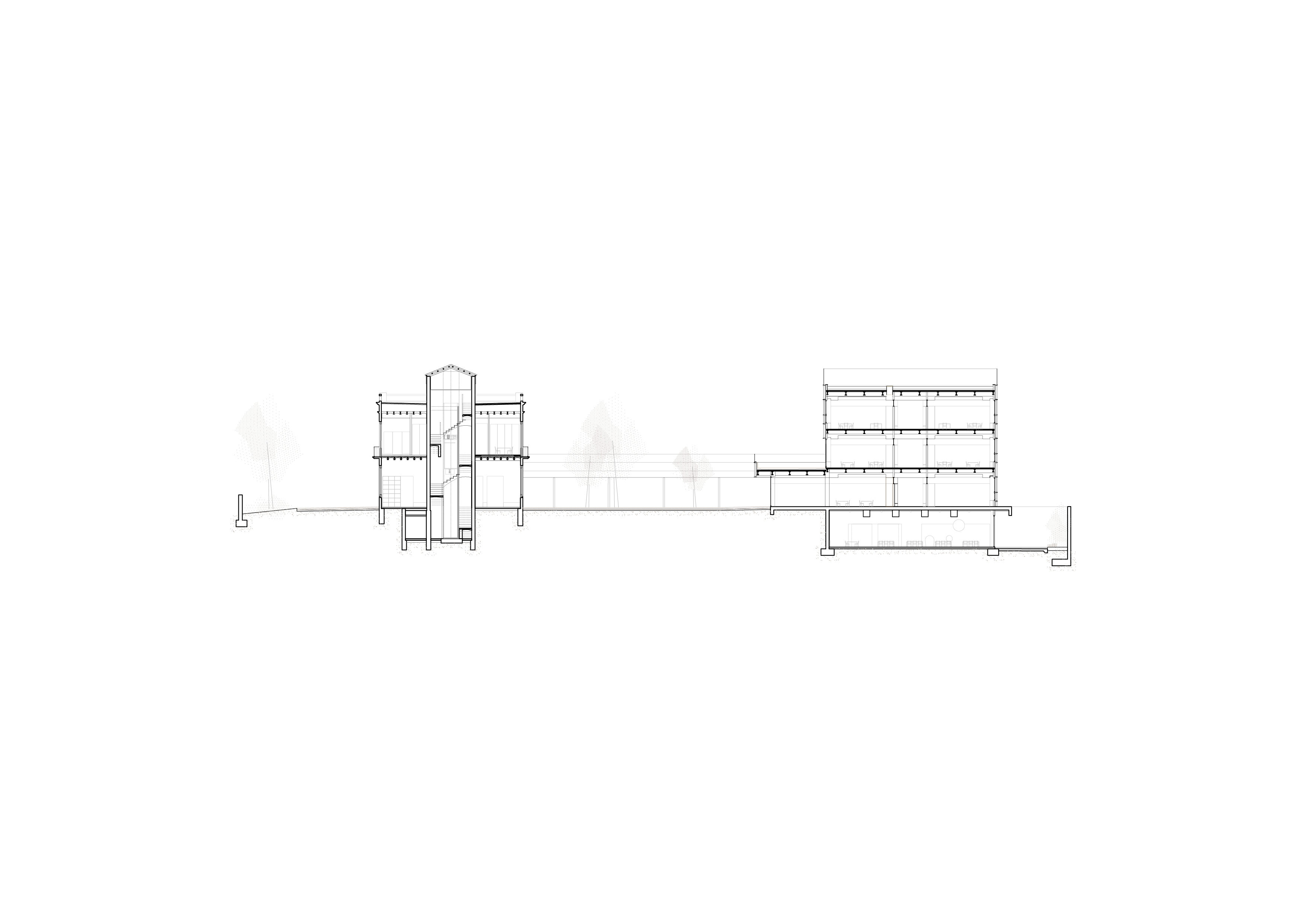 The new set brings forward a dialogue between the historical school and the new one. A visual and programmatic relationship is established between both buildings, through a porch that allows indoor communication connecting them with a space under which to shelter in case of rain.
The formal resolution of the new building evokes the volumetric shapes of the villas through the rounding of its corners establishing a formal relationship without necessarily subordinating itself to a historicist imitation. The scheme of a large central courtyard of games and perimeter spaces is preserved.
The new building is developed in four levels. A semi-basement level that takes advantage of the unevenness between the garden (playground) and the street, to create a direct access which is partially covered, and an outside waiting area for families and children. From here you can access to the interior of the new school and to the garden externally by stairs and ramp. The project locates all the classrooms in the new building, while the common uses: media library, music room and administration areas are located in the preserved and restored villa.
The image of the facade is made by an envelope of vertical slats that run along the entire perimeter of the building. The position, orientation and separation of these slats have been studied to provide optimum solar protection, and highly efficient in their environmental, thermal and durability behaviour. The chromatic and proportional game is the result of a useful and continuous dialogue with the client.

The project of the Lycée Français considers the renovation of a school destined to receive 420 children of infantile level. This renewal involves a global reflection on the accesses and exterior spaces, not only the interiors where special attention is given to the way of inhabiting and living the spaces of the little users. These collective spaces and relationship between both buildings, rise a deep reorganization of the dynamic flows of the school considering the different times and people who inhabit the place during the course of the day. It is taken into account for the accesses the intense flow of parents’ circulation to the arrival and pick up of the children, as well as the internal flows of the students themselves that go from the classrooms (located in the new building), to the playground and multi-purpose rooms (yhese ones located in the old village which is refurbished and maintained for common uses). This Is not a simple project with many different points of intervention (refurbishing of the villa + new building + playground) this project is conceived as a unit of integral improvement of the existing collective spaces of the old school, without losing the essence of it